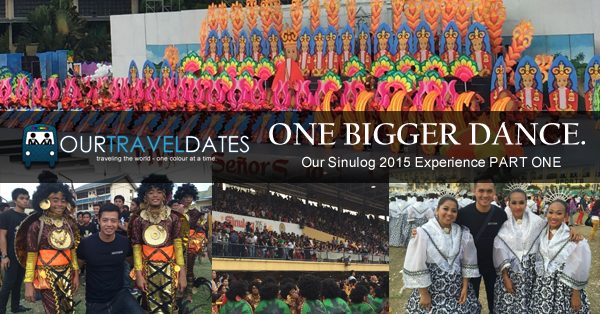 We had a a blast! We hope you did too! Pit Senyor!

We’re writing this exactly a week after to briefly share with you how our 2015 edition of Sinulog experience went. This is the first time we’re writing our experience in this blog, and through this, we want you to be able to grab some ideas on how you will spend your Sinulog too! For those who haven’t been to this massive coloful event, the Sinulog Festival is an annual celebration in honor of Santo Nino de Cebu. This festival happens every third Sunday of January and is much-awaited not only by Cebuanos, but also people around the Philippines and even foreign tourists, too.

One big disclaimer first of all, we both chose the party schedule over the festive events. In the latter part of this story, you will be seeing more of the party photos over the festival ones so we’re taking all the non-party events leading up to the big Sunday here.

We arrived in Cebu January 10 for the sole reason that non-Sinulog-weekend tickets are way way cheaper than when you purchase the Thursday/Friday ones. Plus John lives there  so accommodation won’t be a problem. Another reason is, we haven’t watched last year’s Sinulog Carousel (the Sunday grand festival parade of all the contingents, floats, and other showcase of Cebu’s finests) and afraid we might not be able to do it again on Sinulog Sunday because we might be drunk on a Saturday night, and still get drunk early on Sunday. So we ended up watching the arena performance of Sinulog sa Kabataan sa Dakbayan, It is the annual competition of elementary and secondary schools around Cebu dancing to Sinulog.

Around 5 contingents get to advance to the Grand Sinulog parade, competing against the rest of the contingents coming from Masbate, Leyte, Samar, and Bukidnon. The show starts around 2PM, but I think we arrived late… it was 12noon and the Cebu City Sports Complex is almost full already with crowds cheering like we’re on a UAAP Cheerdance Competition! Here’s some of the photos we took during the competition proper:

And this is how the complex looked like if you’re on the performers’ POV:

Sadly, we weren’t able to watch until the end simple because we made a promise to attend the daily mass leading to the Sinulog weekend. We left the venue during the “Final Dance”, where all the contingents share the stage for one last dance before the announcement of the finalists. But before we left, we had to do this… picture taking time wearing our favorite Our Travel Dates shirt!

Apas National High School, one of our favorites who also bagged the top award.

Going back, we had to rush to Basilica de Sto. Nino to pay respect to the sole reason why Sinulog exists in the first place.

Such an amazing view.

Up next: SRP’s Carnival, Grand Procession and Solemn Mass, and Sinulog weekend parties! Watch out!

Going To Laboracay? Hoop Your Trash And Party for FREE!