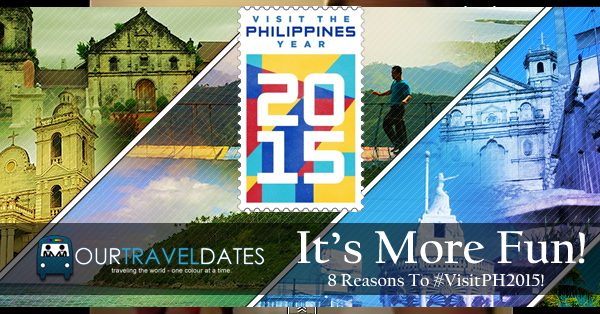 The Philippines is such an exciting country of lively people and amazing attractions!

With so much to do, it’s hard to narrow down the long list of reasons to visit, but here are our 8 brief reasons why you should start planning for your wanderlust experience around the “Pearl of the Orient Seas” this year, may it be to relieve stress, spark curiosity, or regain enthusiasm.

1. 2014 Was A Year Of Recognition for The Philippines

Effective first week of January, Civil Aeronautics Board (CAB) executive director Carmelo Arcilla said the regulator approved the removal of the fuel surcharge! While airline representatives were unavailable for comment, this sounds like a good news if hopefully this pushes through. (Source: Interaksyon)

Thousands of people enjoyed music and merriment at the Philippine festivals held last year. From our experience, Sinulog went super wild on the party side compared to the past few years (and this year, Sinulog is on its 35th!), and Masskara gained more and more attention to travelers year after year. Even the side parties during the festivities are gaining a bigger following each year. Also, events like the Siargao International Surfing competition and Philippine International Dive Show will be one of the sports and adventure events to watch out this year. Other big events happening are:

2015 is a great spiritual year for the Philippines as Pope Francis is visiting us on January 15-19. This also makes us think about regaining spiritual growth, give thanks, petition, remember, and honor our God. Take a walk heading to the magnificent, century-old churches and say a prayer.

Last year, a huge bunch of nightlife establishments opened in Cebu, namely Liv and Den. There are a couple one in Manila too that have gained a huge following in less than a year, namely Valkyrie, Universe, and 71 Gramercy. Plus, did you know that the prices for booze in the Philippines are way way cheaper than in most countries? Party on party hard!

6. Improved Infrastructure Made It Easier To Travel

Travel time to Subic, Baguio and Ilocos is now significantly reduced with the opening of SCTEX and TPLEX. Travelling to the North through these express ways is in itself an adventure. The gateways in the Visayas and Mindanao such as airports in Iloilo, Caticlan and Cagayan de Oro and Pier 1 in Cebu are also improved. Even our NAIA (T1, T3 and T4) has shown some great changes.

Our Department of Tourism Secretary said this year should be a huge opportunity for us Filipinos to be actively involved in promoting the country as whole. DOT is also trying to push tourism in Bohol and Davao for 2015. Let’s be travel-crazy. It’s good. Check this out for more reasons to travel the Philippines: Department of Tourism: Visit the Philippines 2015 Promotional Video.

8. Spend A Yearful of Generosity & Smiles

Isn’t it a wonderful experience being surrounded by the warmest, kindest, and most generous people in the world in your own country? Also, by engaging on new activities on new places with new people, it helps you broaden your horizons and find an innate opportunity to move in new directions.

So pack your bags, and prepare for a year of domestic travel-go-round with #VisitPH2015! For more Philippine tourism events, visit visitph2015.com.

No idea on where to start your Philippine adventure? Take a look at our itinerary this year with Our Travel Dates #VisitPH2015 Travel Destinations Bucket List!

14 Travel Spots In The Philippines On Our Bucket List! #VisitPH2015

JJJ - January 3, 2015
From Rizal to Sarangani, discover your inner explorer from partying and getting the sun tan around the Philippines!

Travel With Your Partner To Bohol For P1 With AirAsia!

Sinulog 2015 Schedule Of Activities And Where To Stay Best